Spectral decomposition has emerged recently as an enlightening seismic attribute, producing very informative maps of thin beds, especially in clastic successions with sharp impedance contrasts (Partyka et al., 1999[1]). These maps are typically interpreted qualitatively, using geomorphologic pattern-recognition, or semi-quantitatively, to infer relative thickness variation. A number of commercial and non-commercial implementations of spectral decomposition are now in use, and the technique is de riguer in the analysis of subtle stratigraphic plays and fractured reservoirs.

There is also considerable scope for applying spectral decomposition quantitatively. As shown in Figure 1, the spectrum of a thin bed has characteristic periodic notches resulting from interference between the signals reflected from the top and base of the thin bed. The spacing of the notches is the reciprocal of the two-way time thickness of the thin bed.

into a 2D time-frequency representation,

. Many methods exist to achieve this and each has different resolution capabilities in time and frequency. 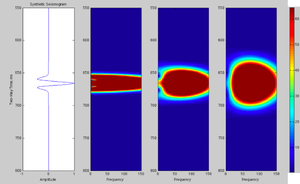 STFT of a synthetic trace using Gaussian windows of (from left to right) 10ms, 30ms, 50ms. Note the tradeoff between frequency and temporal resolution as the size of the window varies.

The short-time Fourier transform (STFT) was the first method used to investigate the local frequency of a seismic trace. It attempts to break the trace up into many subsections whose amplitude-spectrum can be calculated by using the Fourier transform.

It begins by multiplying the seismic trace by a window,

and then taking the Fourier transform of each windowed section,

is the location of the center of the window in the

There are many window functions to choose from, each of which has its own resolution capabilities and artifacts. The most popular windows include: Boxcar, Gaussian, Hann, etc.

There are many applications of spectral decomposition in seismic exploration. It is currently a very popular subject of ongoing research.

The relative thickness of stratigraphic units can be observed using spectral decomposition. As strata becomes thicker, the peak frequency of their seismic response tends to be lower, and viceversa. By taking a horizon slice of a 3D seismic volume, one can predict thickening directions by viewing the slice at progressively lower frequencies. (Partyka, 1999)

This article is a stub. You can help SubSurfWiki by expanding it.